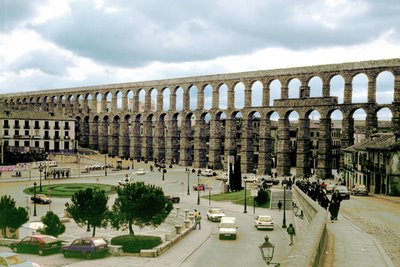 I was tired, stressed and gloomy. It was the perfect moment to go home and have a long hot bath. No power or water cuts in Paradise today, for a change, so I was soon bubbling gently in a steamy soupy tub while practicing my scales.
The Romans had an impressive water system, based on the laws of gravity. Their aqueducts were designed to allow water to fall exactly seventeen cms per kilometre, a speed that allows for the smallest speed of flow. These aqueducts fed public fountains, some wealthier private homes, and above all, the public baths, which Romans felt was the nadir of their civilization. In their baths, they were cleansed physically and mentally. To a Roman citizen, the baths were civilization.
Rome, by the first century AD, had 420 kilometres of aqueducts feeding it from different sources. A hydrographer recently noted that New York didn’t overtake Ancient Rome in volume of water consumed until 1985, and the Romans, of course, had neither electricity or pumps, or rubber washers or plastic piping to help them.
Some of those remarkable aqueducts, built two thousand years ago and used to refresh all of their cities throughout the Empire, are still extant and there are even a few left in Spain, including some that still work! Water was rarely a problem which is how they could build such large cities.
I don’t care for showers. They are violent, fast, and efficient rather like a flight on Air Vobiscum. To continue the simile, a bath is slow and pleasant, roomy and cultural (that is, if you read a book in the tub or listen to the radio or you like to sing). A bath has the same finality but takes its time, a bit like the train to Madrid.
Bathing has always been a civilized event, as can be shown by the Arabs with their hammam, and the Scandinavians, the Russians and the Japanese with their different traditions. Saunas, Turkish baths, Jacuzzis and the rest of them are for relaxing in and, yes, wasting a bit of water.
The average amount of water used by a Spaniard is 175 litres per day. This is a couple of goes on the lavatory, a shower, washing a few dishes and some teeth, a shave, a coffee and a quick squirt with the watering can along the window-box. Now, along comes the ministry with a chilling new order. Spaniards are to use 60 litres per day and to pay a surcharge on anything over.
As a Roman once said while looking out of a window in his bath-house – ‘Bugger me! The Barbarians are at the gates’.