Gloria and her Children 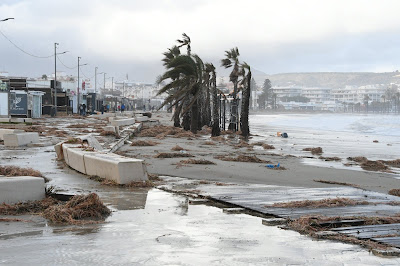 Coastal home-owners in Spain (British or otherwise) must now begin to look to the skies. The storm called Gloria visited us recently and left havoc along the beaches of the Mediterranean. One mayor of a Costa Blanca town is talking of not repairing the beach promenade as it will, he says, only get chewed up again by the next one. But if the beaches are washed away, or the sea rises a few centimetres, or increasingly habitual storms take away the sand and the beach-huts, what about the Ley de Costas, the peculiar coastal law that states that the playa belongs to everyone?
‘The Spanish Coastal Law (ley de costas 1988) defines a public domain area along the coast and a further zone where special restrictions apply to private ownership. The aim is to make the whole length of the coastline accessible to the public and to defend the coast against erosion and excessive urbanisation...’ says The Ibizan here. The idea is sound enough – to stop the wealthy or the hotel chains from putting up signs saying ‘private beach’, but the law also refers to houses which are close to the sea. They are seen as ‘lease-hold’ by the State (and the State wants them and will get them back in 98% of the cases mounted against it), and they may be used, normally without any major repair, for thirty years from official notification. A reform in the law from 2013 to grant extensions of 75 years was passed by the PP government, but so far, has not been tested.
As the shore moves inexorably inland, for the reasons stated above, a process known as climigration ensues, where societies must move their entire communities elsewhere. Not perhaps happening in Spain – apart from the Ebro Delta – but a worrisome sign of the future.  Thus the Ley de Costas moves with it, and as El Confidencial warns, ‘The unprecedented series of storms leaves thousands of houses on the coast open to the risk of expropriation’.  The rule is that the law considers in the public domain land that is within the limit marked by the highest waves of five storms over the last five years. Since 2017, the Mediterranean has already lived four ‘gota frias’ (now known as ‘Depresión Aislada en Niveles Altos’ (DANA). One more heavy storm, and many apartment blocks, homes and businesses will be potentially open to expropriation by the State.
It’s no secret that the Mediterranean coast is heavily built up, with Málaga, Barcelona and Valencia having urbanised over 60% of their share, and it falls to our friends the ecologists to threaten the unspeakable: ‘We can’t call to demolish everything, but some things will have to go’ says a spokesperson for Ecologistas en Acción. Experts in ‘natural risk’ from the Official College of Geologists say the same ‘...to deconstruct the coastline to facilitate the natural reconstruction of the beaches as a measure to avoid future catastrophes such as the one generated by Storm Gloria...'.
The Olive Press asks (with video) ‘Did Climate Change cause Storm Gloria?’
Or is it, perhaps, just a bad patch we’re going through.
Posted by Lenox at 5:02 AM